Santos has lodged a big report based on false assumptions to push its Narrabri CSG project through regulators. Its independent expert is not independent, nor expert. Michael West investigates.

They thought they could get away with it; that is, lobbing a chunky “independent expert’s report” at one minute to midnight in a bid to win approval to frack for coal seam gas at Narrabri.

It is down to the wire for Santos’s CSG project in NSW. Just one more hurdle. Despite myriad environmental concerns and strident opposition from farmers and the local community, the project got the tick from the NSW environment minister. Note well: *environment minister*.

Final approval rests with the Independent Planning Commission and Santos has endeavoured to game the process by lodging a voluminous “expert” report at the eleventh hour with new claims over the costs for the project, false claims.

The report is a hoax. The gas cartel of Santos, BHP-Exxon, Shell and Origin have kept prices so high they have killed domestic demand for gas.

“The entire basis on which Santos/Acil Allen’s report is written – the claim that there is stable domestic demand – is incorrect,” writes gas analyst Bruce Robertson in a report for IEEFA.

“Domestic demand is falling, despite low prices, and is destined to fall further and faster due to the global gas supply glut and the flattening of international prices.” The graphic below tells the story. If this chart shows “relatively flat demand” then Santos has a funny idea of what constitutes “flat”. 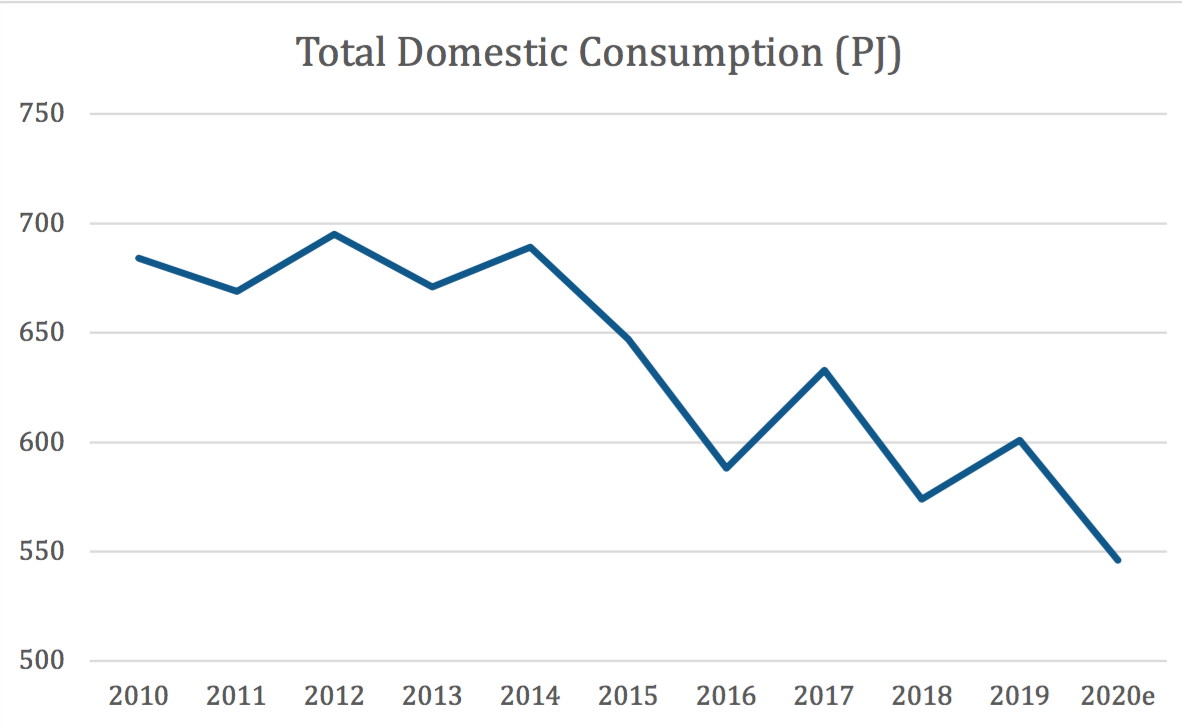 Robertson, a farmer and analyst at progressive research house IEEFA, has form in picking lies and duds in the energy sector. He exposed the electricity transmission giants in 2014 for claiming demand was rising when it was falling.

When they shamefully changed their story to claim it was “peak demand” that was rising, rather than overall demand, Robertson proved that too was falling.

A couple of years later, when the gas cartel was lobbying to frack the Gloucester region for coal seam gas, Robertson again exposed their “supply cliff” contentions as false. There is no supply cliff, nor was there. Australia has since vaulted Qatar to become the biggest gas exporter in the world.

Now, as the Government and its gas-stacked panel of NCC economic advisers (the “Covid Commission”) are preparing to splash billions in taxpayer money on gas projects as Australia’s “transition fuel” to a renewable energy future, Bruce Robertson has exposed their entire argument as a deception.

The most glaring falsehood in the Acil Allen supplementary submission to the Independent Planning Commission (IPC) which will decide shortly whether to approve the Santos project is that gas demand is not “relatively flat”, it has fallen.

Gas usage in Australia has declined by 21% since 2014. It has fallen because the gas cartel has pushed gas prices so high they have killed demand. Gas usage for electricity generation has dropped by 58% since 2014.

“The current spot gas price is less than half this price at $4.21 in Sydney (as at 21 August 2020). Contract prices are in the range of $8-11/GJ. Santos cannot supply gas to Sydney and make a profit from the proposed Narrabri gas fields at current gas prices.”

Acil Allen has form when it comes to questions over its research and independence.

Oil and gas major Chevron, operator of the Gorgon and Wheatstone LNG projects, dusted off an old report it had commissioned from ACIL Allen Consulting to present to a Senate inquiry investigating tax and royalties. This claimed Chevron’s contribution to government coffers between 2009 and 2040 would be a thumping $338 billion.

Even before Covid and the collapse in the global gas sector, the claims were deemed extravagantly wrong.

Although he did not reject the ACIL report as being old at the time, Chevron’s managing director Nigel Hearn predicted the PRRT payments from Gorgon (now shipping) and Wheatstone (to ship later this year) would be between $60 billion and $140 billion.

It never came to pass. It never will. Now we have Acil Allen backing Santos’s claims that Narrabri’s onshore gas will be cheaper to produce than previously thought. Even if this were true, there is no case for tearing up farmland to produce more gas when there is more than adequate supply.

This supply however is being manipulated to keep domestic gas prices high. The cartel is selling low into foreign LNG markets just to get rid of the supply overhang so they can charge Australian consumers higher prices.

“One of the key reasons the domestic LNG price on the east coast of Australia did not fall as overseas prices fell was that in the last quarter of 2019 and in early 2020, LNG producers collectively sold 18 LNG spot cargoes into international markets at prices substantially below domestic gas price offers,” says Robertson.

These sales are in contravention of the Heads of Agreement set out between LNG producers and the Australian Government, which stipulates that uncontracted gas must first be offered to the domestic market on “competitive market terms” before it is offered to the international market. This has not occurred, and no action has been taken by the government to rectify this.”

“(Energy Minister) Angus Taylor instead brought out his big stick to bring the gas companies into line (it is in fact not a stick but a sack of money to shower them with)”.

Rather than policing the cartel properly, the Government’s solution to this breaking a Heads of Agreement and price fixing has been to give them a bag of money. That the cartel donates via its individual members to the three major parties should be noted.

ACCC chairman Rod Sims has noted a number of times that there are issues in the gas market. There have been umpteen inquiries pass, billions of dollars of losses notched up by the gas majors in their LNG export disaster – losses they are recouping at the expense of Australian customers and taxpayers. It is time Sims and the ACCC take action.

Tablelands Regional Council has partnered with the University of Queensland to conduct a survey on the effects of esports (competitive gaming) on youth behaviour. ‘Esports...
Read more

ABOUT US
Eacham Times is your Digital News Service for primary production, entertainment, music, lifestyle and fashion. We provide you with the latest breaking news and videos straight from your local community.
Contact us: sales@eachamtimes.com.au
FOLLOW US
© Copyright © 2019 The Eacham Times. All Right Reserved